Mapping team goals is a booklet written by Vicky Eames and David Denborough. It uses a narrative therapy approach to working with young people – setting team goals that are based around sporting analogies.

The following extracts are taken from the ‘Mapping Team Goals’ booklet:

Goal Maps are a fun and engaging way to recognise achievements and acknowledge how others helped make it happen. The achievements of young people are often not recognised by themselves or others, so initially children may struggle to identify personal milestones. Small day-to-day achievements form the building blocks of personal, social and emotional development, but the significance of such achievements is frequently underestimated. Even larger achievements in life are often dismissed and not acknowledged. 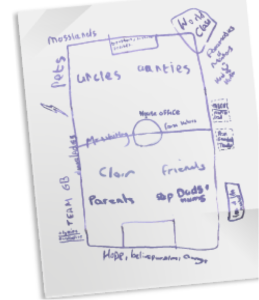 When young people’s goals are celebrated, rarely are they spoken about as collective achievements and the contributions of friends and family members to that particular achievement may pass by unnoticed. These are missed opportunities. One of the pleasures of team sports is that, whichever team-mate scores the goal, everyone celebrates. Achieving goals in life is often a team effort and inviting young people to consider a goal that their team has scored, rather than a more individually focused achievement, acknowledges this. Thinking of goals as a ‘team goal’ can also take the pressure off the individual, making it easier for them to identify a past achievement.

Using the metaphor of scoring goals in sport provides an engaging way for participants to develop a richer understanding of the story surrounding their team’s goal, the ‘passes’ along the way and the team-mates who stepped up to help.

What is the Team of Life?

The Team of Life is a narrative methodology which uses sporting metaphors to encourage young people to recognise the skills, strengths and resilience of their life teams (see Denborough, 2008; www.dulwichcentre.com.au/team-of-life).

It is a playful approach which engages young people through the language of sport rather than the language of problems; enabling them to reflect upon previous accomplishments and recognise how they overcame obstacles with the help of those around them.